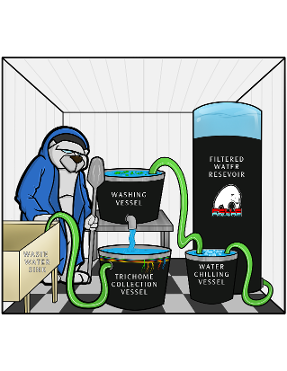 With so much hash and rosin coming to market, it can be difficult to understand the grades, styles, and consistencies to aim for as a hash maker or consumer. Modern solventless hash and rosin are much like wines or beers, with vastly different levels of quality and styles selling at all-different price points. We will attempt to make some sense of it in this short write-up.

The first decision to make is the size of the batches and facility design. Are you working on a personal or even mid-size, and plan to process the highest quality hash and rosin in smaller batches, or is the aim a commercially viable scale creating maximum product with less attention paid to quality? What products do you plan to make; fresh frozen derived rosin, FTDC derived rosin, bubble hash, temple balls? The design of your facility and your choices for equipment rely heavily on the above factors.

Hash made in small “boutique” batches, allows producers to oversee minute details during the hash making process. Expect to pay a premium for small batch hash as it is typically of the highest quality. Increasing and multiplying the scale of production to increase and maximize profits is bound to accelerate the inadequacies only small batch hash rosin can thoroughly adjust and try to account for unless done properly.

Scaling to a larger commercial size operation typically leads many operators to cut corners to maintain financial budgets and demands and reduce overhead costs. As scales of operations increase, profit margins are often reduced because of size and cost of equipment, space, and expensive machines bought in hopes of producing mass quantities, and a balance must be struck on efficiency, quality, and profit. Small-batch producers don’t face the same obstacles, leaving small-batch style hash and rosin to be the highest possible quality in most cases. Some commercial producers have scaled up properly and keep it small batch style, utilizing numerous smaller washing vessels with multiple person wash teams, and multiple presses rather than attempting massive size washes in giant machines then trying to press out giant slabs of hash into “quality” rosin with tons of pressure and massive plates.

As we switch gears into the hash, the options can be reduced to two basic choices for material to process; freshly frozen cannabis at harvest, or dry and cured cannabis? Using fresh frozen material leads to the highest possible hash and rosin, distinguished as “Live hash rosin.” The cured cannabis derived rosin and hash, known as FTDC (full term dried cured) rosin and hash can utilize trim and smaller flowers, or even your choice top buds (however these are typically more valuable sold as flower). The rosin and hash made from FTDC material can be very high-quality material, close to if not equal in quality to many fresh frozen rosins if processed and stored properly from farm to the point of processing for hash.

Before discussing how the cannabis trichomes are filtered out of the water after cannabis has been washed within, let’s cover the different solventless hash consistencies or products that you have the option to create. All these products begin as ice water hash, but only six-star, “full-melt” ice water hash will sell as is. Hash just below a perfect six stars will undergo additional filtration to create rosins, fresh press, cold-cure badder, or the jar-tech aka rosin sauce, etc. The very best ice water hash will remain as hash and be sold for the highest price. The rest of the hash is packaged in small silk press envelopes and ran through a rosin press, utilizing hydraulic jacks for pressure and low heated plates to press and squeeze the ice water hash into a fresh-press Rosin. It can remain a fresh press rosin product or be further processed to create a rosin badder/jam, or processed into diamond sauce style rosin.  The three consistencies of rosin go for relatively equal amounts pricewise, however demand for each greatly fluctuates. These rosin products can utilize both fresh frozen cannabis or FTDC to begin with.

A bit about the actual washing; after the material wash, either fresh frozen or FTDC material, the water containing the trichome heads that have broken or fallen from the material during the wash is then poured through a consecutive series of mesh filter-bags, in decreasing mesh size. With the starting material washed in 220-micron bags which releases only material smaller than 220 microns into the water and leaving the larger pieces and particles behind, the goal then becomes rinsing, sifting, and separating by size from the water and rinsing any residual plant matter away and through the collection bags leaving only the precious trichome heads behind in a pile, which is then referred to as hash.

As the wash water is poured through the series of mesh filter bags and rinsed clean, bags are removed one at a time, and the hash collected.The 159-90 even sometimes down to 75-micron ranges are considered optimal and go for the highest prices.The 120 to 90 bags often yield the very highest quality hash possible, known as “full-melt”.Good quality hash is collected down to the 45-micron size and sometimes even down to 25. Washing cycles repeat until the collection cycle is not returning any more quality, usable hash (often up to 10 cycles or more) and hash quality typically degrades as the washing progresses.

Earlier washes being the highest quality and value because the majority of the material collected early on in the washing are the large mature trichome heads, later washes collecting more of the smaller trichomes and stalks. Collection process depends upon the next processing stage, pressing. Factors that decide collection process include; usable range of trichomes (for FTDC the 159-90 is typically the best material to press, fresh frozen basically anything from 25-219 can warrant collecting for further processing), full-melt collection or full-spec? Each of the washes of cannabis material are passed through the same set of filters, and collected trichomes are spooned from the mesh bags, onto trays to dry. Drying can be done by air, or by machine, the latter typically being preferred as machines are far more efficient at quickly and thoroughly drying materials, which rules out any chance for mold growth or possible degradation of color, terpene loss, or flavor loss. Once dry, the hash can then be kept as is, full-melt hash if good enough quality, further refined into rosins, or traditional style "hashish" made into various shapes and forms, all mostly for traditional style smoking.

While fresh frozen derived products demand the highest dollar point, using dry and cured cannabis can still equate to extremely high-quality hash and rosin. With practice and a bit of expertise, full-melt quality hash is attainable not only from fresh frozen material, but also from dry and cured material. Depending on whether it is a run of buds and flowers or just trim and shake, different qualities are to be expected. Hash and Rosin made from trim can be a very high-quality rosin, which opens a lot of doors in terms of running a business as you can now offer different entry points for hash and rosin because trim can be sourced much cheaper. Demand for each product can greatly vary, so having a wide array of available options allows you to still make money in a market that may not be interested in or be able to afford only the highest end products.

As the solventless hash market begins to mature, there will surely be demand for all styles and at all price points. Not everyone can produce or afford six-star full melthash and rosin, and some people prefer the more developed aged FTDC rosins, leaving plenty of room for new, cost-effective, and innovative techniques and products created through ice water extraction. Right now, industry standards are wide open, with plenty of demand yet to be tapped in to and even created where there is none by educating your consumers on why your products are so great! Whatever your plan for size of operation or products to make, PellePolare is here to help you succeed!